Welcome to the 'Sports' section. Here you can browse the 'Soccer', 'Cricket' and 'Other (Sports)' sub-sections. The ongoing main sports events will be featured in this page.

Arsenal captain Cesc Fabregas flies back to London but is closer than ever to Barcelona switch *Further developments expected in next 48 hours *No showdown talks expected as Wenger is overseas *Spanish ace does not want 'convincing' of summer strengthening    ...

Europa final was a hurdle too far for Fulham - Duff

Europa final was a hurdle too far for Fulham - Duff   Click > Here < To listen to what Duff had to say.... Fulham winger Damien Duff says it will time for the team to get over losing the Europa League final to Atletico Madrid in extra time, but believes they can come back stronger...

Murray eases past Chela in Madrid Andy Murray showed signs of returning to his best form with a comfortable 6-3 6-3 win over Argentine Juan Ignacio Chela in the Madrid Open second round.   The 22-year-old Scot, who had won his last four matches with the world number 51, took the first eight... 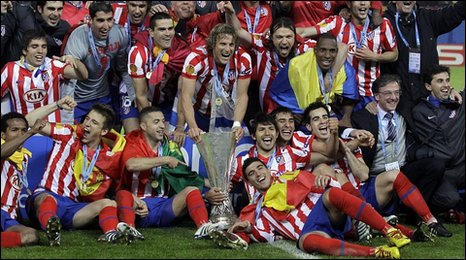 Forlan poached another close range finish to put Atletico ahead in the first half, but Simon Davies responded swiftly with a volleyed equaliser for Fulham to spark hopes of a first European trophy heading to Craven Cottage.

But Forlan, tormentor of Liverpool in the semi-final, seems intent on making up for his unfulfilling spell at Old Trafford by inflicting pain on Premier League teams every time they cross his path - and how Fulham felt the agony as their players lay on the turf as Atletico celebrated wildly celebrated the decisive goal.

Atletico created the better opportunities in a final short on serious excitement, with Forlan striking a post and Aguero somehow poking wide from almost on the goalline in the first period of extra time.

Fulham will feel nothing but despair at their failure to close out a season that has captured the imagination of the nation with silverware, but they have delivered pride to themselves, their fans and the Premier League as they took on some of Europe's elite and only fell at the final hurdle.

Hodgson's side could not quite touch previous heights in Hamburg, unquestionably hindered by the fitness problems suffered by striker Bobby Zamora, their European talisman who battled gallantly without reward despite the handicap of an Achilles tendon injury that is now expected to require surgery.

The successes enjoyed in the Europa League have enhanced Fulham's reputation - especially that of their manager Hodgson. They must now hope they can ward off interest from other clubs understandably impressed by his remarkable rejuvenation of a club on course for the Championship when he was appointed.

Fulham, as expected, were able to call on Zamora and Duff - but it was Atletico's dangerous strike duo of Forlan and Aguero who emerged as central figures in the Spanish side's domination of the first half.

Danny Murphy carelessly, and almost fatally, presented Aguero with possession in dangerous territory and would have been the most relieved man in the Nordbank Arena to see Forlan's shot glance away off the post after he was played in by the Argentine.

And Fulham keeper Schwarzer needed to be alert to hold on to Jose Antonio Reyes' angled free-kick at the second attempt as it headed for the top corner.

Davies finally gave Atletico keeper David de Gea work to do with a snap shot that he clutched above his head, but Atletico made the breakthrough their supremacy merited after 32 minutes.

There was an element of good fortune for Atletico as Aguero's miscued shot was transformed into the perfect pass for the lurking Forlan to steer past Schwarzer from close range.

Forlan had another shot saved by Schwarzer as Atletico looked to press home their advantage -but as so often this season, just when they looked in serious trouble, Fulham found a way of fighting back eight minutes before half-time.

Zoltan Gera's cross took a deflection and fell at the far post for Davies, who accepted the invitation to flash the sweetest of half volleys beyond De Gea before he had any hope of reacting.

Zamora, who has been fighting a losing battle with an Achilles tendon injury, was replaced by Clint Dempsey early in the second half as Fulham finally showed signs of gaining a measure of control on the game.

And it was Davies who almost completed the turnaround on the hour when he delivered an instant strike from a poor Atletico clearance, but this time De Gea was able to make the block.

The game then drifted listlessly towards extra time, although Atletico finished the stronger. Several Fulham players needed massages before the action got under way again to combat the effects of their exertions.

Fulham survived an anxious moment 10 minutes into the extra period when Schwarzer could only palm away Forlan's low driven cross, but it escaped Aguero as he waited to pounce inside the six-yard box.

Hodgson's men then had an even bigger escape when Forlan left Chris Baird behind as he surged into the box, but in the ensuing scramble Aguero somehow poked wide from a yard out with the goal gaping.

As penalties beckoned, Atletico struck so late that it was impossible for even Fulham to mount a response. Aguero got the better of Chris Baird, and his cross was touched in by Forlan to provide a bitter conclusion to this wonderful European journey.

Kudos Utopia Earth kudos_utopia@yahoo.com
Webnode, an innovative sitebuilder
Have a captivating website for free!
Get started