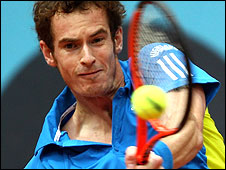 Andy Murray showed signs of returning to his best form with a comfortable 6-3 6-3 win over Argentine Juan Ignacio Chela in the Madrid Open second round.

The 22-year-old Scot, who had won his last four matches with the world number 51, took the first eight points of the match and raced into a 3-0 lead.

He broke Chela for a third time to take the opening set before dropping his own serve at the start of the second.

But he stepped up a gear to progress to a meeting with Romanian Victor Hanescu.

The world number five showed glimpses of his best form which has deserted him over the past few weeks following first-round exits in successive tournaments in Miami and Monte Carlo.

Murray, who received a first-round bye, made an impressive start as he raced to a 3-0 lead after twice breaking Chela's fragile serve.

Although he lost his second service game, Murray went on to clinch the first set with a sublime cross-court checked forehand winner against serve.

Chela, ranked 46 places below Murray in the world rankings, immediately hit back at the start of the second, breaking the third seed's serve for the second time.

But Murray responded positively and levelled the set, albeit fortuitously when Chela's return bounced off his racquet at the net with Murray in no control of his shot.

And he soon found his service rhythm, making the decisive break in the sixth game for a 4-2 lead before closing out for a well-earned victory.

"It was the best I have hit the ball in a long time, I felt comfortable on the court," he said.

"I didn't serve that well in the first set but in the second I started to serve a lot better and started to hit winners.

"When I relax on my serve, as I did in that second set, I don't get broken too often.

"Obviously I want to win as many matches as possible and go as deep as I can into the tournament, but right now I'm focussing on how I am playing."

Murray won the Madrid title in 2008 when it was an indoor tournament played in the autumn.

Kudos Utopia Earth kudos_utopia@yahoo.com
Webnode, an innovative sitebuilder
Have a captivating website for free!
Get started